Kempner, medical doctor and research scientist, is the father of modern day diet therapy and creator of the Rice Diet. All who have followed in his footsteps, including Nathan Pritikin, Dean Ornish, Neal Barnard, Caldwell Esselstyn, and myself, owe homage to this man and his work.

Kempner’s Rice Diet program began at Duke University in Durham, North Carolina in 1939. The treatment was a simple therapy of white rice, fruit, juice, and sugar, and was reserved for only the most seriously ill patients. Although low-tech, the benefits of the Rice Diet far exceed those of any drug or surgery ever prescribed for chronic conditions, including coronary artery disease, heart and kidney failure, hypertension, diabetes, arthritis, and obesity.

Originally used for only short time periods and under close supervision due to concerns about nutritional deficiencies, subsequent research proved the Rice Diet to be safe and nutritionally adequate for the vast majority of patients.

A major breakthrough occurred by accident in 1942 when one of Dr. Kempner’s patients, a 33-year-old North Carolina woman with chronic glomerulonephritis (kidney disease) and papilledema (eye disease) failed to follow his instructions. Because of Dr. Kempner’s heavy German accent she misunderstood his instructions to return in two weeks, and after two months, she finally returned, with no signs of deficiency, but rather with robust health. The woman had experienced a dramatic reduction of her blood pressure, from 190/120 to 124/84 mmHg, resolution of eye damage (retinal hemorrhages and papilledema), and a noticeable decrease in heart size.

After this experience Dr. Kempner began treating his patients for extended periods of time, and expanded the indications from only serious troubles (glomerulonephritis and malignant hypertension) to patients with relatively minor illnesses, such as routine hypertension (160/100 mmHg), headaches, chronic fatigue, chest pains, edema, xanthoma, pseudo tumor cerebri, and psoriasis.

During his career, fellow professionals wanted Dr. Kempner to set up randomized, controlled studies. However in studies designed this way, half of the patients are treated and half go untreated. His medical ethics would not allow him to deny his proven diet therapy to anyone; therefore, he declined. Furthermore, he correctly pointed out that each patient served as his own control.

Dr. Kempner documented the benefits of his treatments by tracking their changes in cholesterol, blood pressure, blood sugar, and body weight, as well as with pictures. For example, his records showed that 93% of patients with an elevated cholesterol benefited with an average reduction from 273 mg/dL before treatment to 177 mg/dL after. These reductions in cholesterol are greater than those usually seen with powerful statin drugs, and without the costs and risks. His numbers also showed how a high-carbohydrate diet improved blood sugars and often cured type-2 diabetes.

The following are typical examples of the benefits Dr. Kempner observed from the Rice Diet: Reducing Massive Obesity: In one article the results of 106 massively obese patients treated as outpatients with the Rice Diet, exercise, and motivational enhancement under daily supervision were reported. The average weight loss was 63.9 kg (141 pounds). Normal weight was achieved by 43 of the patients.

Curing Severe Hypertension. In the beginning, Dr. Kempner treated only patients with near-fatal conditions, like malignant hypertension (blood pressures in the 220/120 mmHg range). In this emergency condition people often suffered from heart and kidney failure, and eye damage (with retinal hemorrhages, exudates, and papilledema). Today such patients are treated with powerful medications and laser eye surgery, with far greater risks and costs, and far fewer benefits. The safe and effective Rice Diet treatment for eye damage and kidney damage has been largely forgotten. 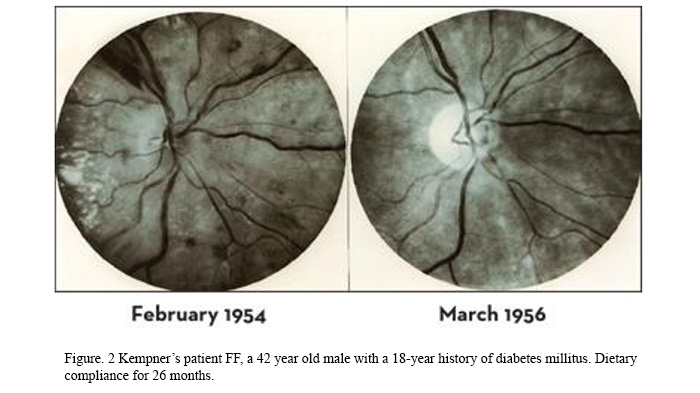 Stopping Hemorrhages and Exudates. The eyes are a window to the condition of the blood vessel system and major organs throughout the body. By looking (with an ophthalmoscope) into the back of the eye (retina) a physician can actually see ongoing damage, which is not limited to the eye, but is also happening in the kidneys and all other tissues. Photos of the retina show how the Rice Diet stops the bleeding (hemorrhages) and leaking (exudates) from blood vessels. This serves as a dramatic demonstration of the body’s ability to heal given the supportive environment of a healthy diet. 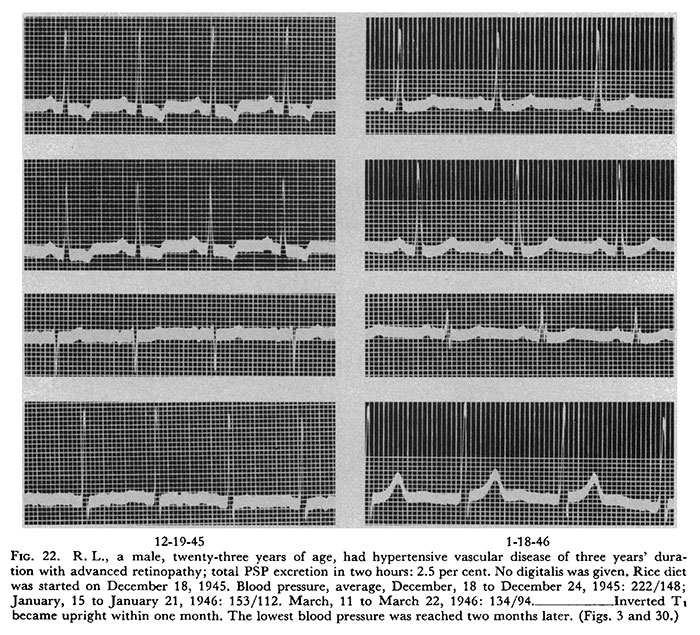 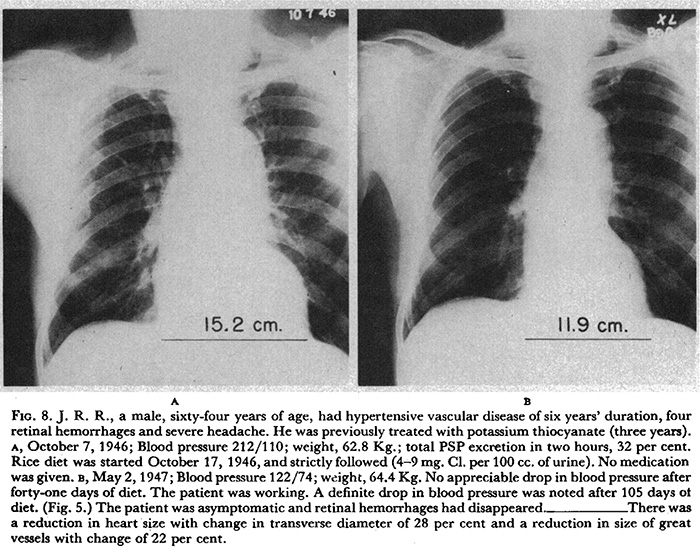 Treating Heart and Kidney Failure. In late stages of disease, the Western diet causes the failure of major organs, including the heart, kidneys, liver, and brain. Enlargement of the heart, as seen on a chest x-ray, is a classic sign of heart failure. The Rice Diet causes enlarged (failing) hearts to revert to normal size and function. Kidney function also dramatically improves, as does the patient in general. 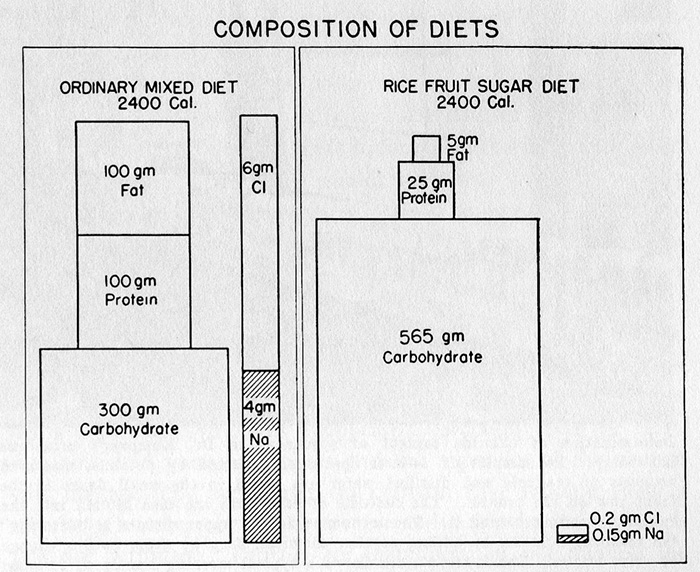 *Dry rice of 250 to 350 grams daily forms the basis of the diet. Any kind of rice is used as long as it contains no milk or salt. The rice is boiled or steamed in plain water or fruit juice, without salt, milk or fat. (One cup of dry white rice weighs about 200 grams, and contains about 13 grams of protein, 150 grams of carbohydrate, 1 gram of fat, and 700 calories.)
*Calorie intake is usually 2,000 to 2,400 calories daily. Intake varies based upon the patient’s condition: underweight people are fed more calories, and vice versa.
*Fruit and fruit juices are allowed.
*Dried fruits can be used as long as nothing but sugar has been added.
*White sugar may be used as desired (ad libitum); on average a patient takes in about 100 grams daily (400 calories) but, if necessary (to maintain body weight), as much as 500 grams (2000 calories) daily has been used.
*No avocados, dates, or nuts.
*No tomato or vegetable juices.
*Supplementary vitamins are added in the following amounts: vitamin A 5,000 units, vitamin D 1,000 units, thiamine chloride 5 mg, riboflavin 5 mg, niacinamide 25 mg, calcium pantothenate 2 mg. (However, none of the Rice Diet patients during five months of treatment showed any signs (epithelial, neural or metabolic) to make one suspect any vitamin deficiency.
*Adaptation to the diet takes about two months.
*Exercise is encouraged. Bed rest is only advised with severe conditions.
*Water intake is restricted in some severely ill patients to less than 1.5 liters (6 cups) a day to prevent water intoxication and electrolyte imbalances.
*A few patients with kidney disease cannot tolerate the diet because of their inability to retain minerals.
*Once the patient’s health has returned, then small amounts of non-leguminous vegetables, potatoes, lean meat or fish (all prepared without salt or fat) may be added. However, if these additions result in adverse consequences (elevated blood pressure, enlargement of the heart, abnormal EKG changes, worsening kidney or eye conditions, etc.), then the basic Rice Diet, without modification, must be continued.
*A physician competent in diet therapy should follow anyone in need of the Rice Diet. Sicker patients need closer supervision.

The nutrient breakdown is about 2,000 to 2,400 calories per day (depending on the patient’s body weight): 95% carbohydrate, 4 to 5% protein (20 to 25 grams), 2 to 3% fat (rice is relatively high in the essential fat linoleic acid), 140 milligrams of calcium, and 150 milligrams of sodium daily. For more rapid and effective weight loss, the calories are restricted.

Why White Rice And Table Sugar?

One reason Kempner chose rice was because he believed that rice proteins were easily assimilated and there was no concern about getting sufficient amounts of the essential amino acids. (This adequacy and completeness of protein is not limited to rice, and is true for all starches, including corn, potatoes, and sweet potatoes.) He chose rice rather than another starch because, in his day, nearly half of the world’s population consumed large amounts of rice (sometimes rice made up 80% to 90% of their diet).

White rice, as opposed to brown whole-grain rice, was used because it was considered more palatable to the general public and was more readily available. Plain white rice contains about 8% of calories as protein. The addition of simple sugars brings the protein content of the Rice Diet down to 5% or fewer of total calories. The body only needs a small amount of protein daily (fewer than 5% of calories from food). The liver and kidneys must process and excrete any protein consumed beyond the basic requirements, causing extra work and often organ damage.

The addition of white table sugar adds calories without protein and fat. Fruits and juices are also high in sugar (carbohydrate) calories and low in fat and protein. The primary benefits of the Rice Diet are accomplished by easing the workload on compromised tissues and organs by providing them with clean-burning energy from carbohydrates and avoiding common dietary poisons such as salt, fat, cholesterol, and animal protein. In such a supportive environment the body’s healing powers can outpace the damages once caused by unhealthy foods. Dr. Kempner added multivitamins, which may be necessary because of all the refined foods served. Using whole foods (specifically the McDougall starch-based diet), rather than white rice and sugar, provides all necessary vitamins and minerals. No supplements are recommended other than vitamin B12.

After nearly 70 years, in 2002 Duke University severed its relationship with the Rice Diet. The Rice Diet program, however, continued to run independently until the fall of 2013 under the direction of Robert Rosati, MD, when it closed for business. Kitty Rosati (with her husband, Robert) has published several national best-selling books on the Rice Diet. Francis Neelon, MD, the Rice Diet’s former medical director, has joined with business interests to reestablish the Rice Diet, and they plan to open an outpatient facility in Durham, NC beginning in February of 2014. The McDougall Diet vs. The Rice Diet

Walter Kempner, MD was very influential on my career. His published work showed me the power of diet therapy and that nutritional deficiencies do not occur with simple plant-based diets (even with the addition of lots of sugar). Even before I was born, Dr. Kempner had disproven concepts that are still held as true by most medical doctors today, such as, “diet has little to do with heart disease,” “additional protein improves health,” and “carbohydrates cause diabetes.”

I find myself recommending the Rice Diet several times a year to the few patients I see who are on the verge of complete heart or kidney failure. Otherwise, I recommend the McDougall Diet (a starch-based diet with fruits and non-starchy-vegetables along with some salt and sugar for flavorings) to almost all of my patients.

No apology needs to be made for serving pasta and marinara sauce, bean burritos, or rice and Chinese vegetables. The diet I recommend, the McDougall Diet, is for the living. The Rice Diet is one that I reserve for the “nearly dead.” I am grateful every day for Walter Kempner’s contributions to medical science. Unfortunately, because profits, rather than patients’ welfare, dictate common medical practice, diet therapy remains unappreciated and practically unknown.