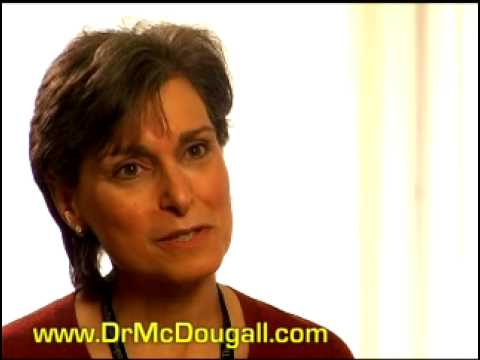 Phyllis Heaphy cured her rheumatoid arthritis and got her life back by following a simple diet of delicious foods, no pills, side effects, or expense. I have overcome rheumatoid arthritis (RA) by following Dr. McDougall’s dietary suggestions, and my recent trip to Paris has inspired me to tell everyone about my recovery. My goal with this account is to help others suffering with crippling arthritis.

About eight years ago, at the age of 46, I began suffering with pain after standing still for long periods of time. My feet would become tender and very sore. Soon thereafter, I began experiencing “traveling” inflammation to various parts of my body: one week it would be in one or two fingers, the next week in one of my wrists, a month later in my shoulder. I became so stiff that I could hardly bend over to tie my shoelaces. I was becoming a cripple; I limped all the time. I could not even think about traveling. Almost every night I was awakened with pain. My efforts to ignore my obviously deteriorating health failed as I became progressively worse. The turning point was four years ago when I spent two days unable to walk – the pain was so intense in the balls of my feet that the slightest pressure was unbearable –- I cried as I tried to make my way across the room. I knew that whatever I had (I had not been diagnosed yet), would only get worse.

I made up my mind to see a doctor. The rheumatologist I visited in September 2000 spent almost an hour examining me and questioning me before giving her diagnosis of mild-to-moderate RA. It sounded like a death sentence. She began to write out a prescription for methotrexate, a powerful immune-system-suppressing drug often used to treat cancer, and told me that I would need to have blood tests every few weeks to monitor the drug’s effects on my liver. She summarized her rationale with, “we had to hit early and hit hard”. When I asked her if any types of food might cause or exacerbate RA, she said “definitely not”, although caffeine might aggravate the condition. She told me that I would be back before long. I thanked her for her careful diagnosis.

I felt shocked and frightened as I walked out of her office. I realized that I had an incurable disease, treatable by powerful drugs with serious side effects, and I would be sick and on drugs for the rest of my life. I never filled the prescription. Instead I searched for months on the Internet for any connection between food and RA – which I was convinced there must be.

Finally, one day I stumbled onto a reference to Dr. McDougall’s ultra-low-fat vegan diet for arthritis. From e-mail exchanges with Dr. McDougall I learned about the importance of also eliminating wheat, corn, and citrus fruits from my diet. He said that there are five common plant allergens, in addition to the dairy and other animal foods, namely: wheat, corn, citrus, tomatoes, and strawberries. The results were nothing short of miraculous: within a few days of eliminating unhealthy foods I became almost (perhaps 90%) pain-free, and I have continued to improve ever since.

I occasionally have bouts of inflammation in one joint or the other, at which time I will take one 200-milligram Advil (purchased over the counter). Since December 31st, 2003, I have taken only 8 regular-strength Advil. This means that I have had inflammation only 8 times in over 9 months. I take an Advil the instant the inflammation starts, and only one Advil is necessary to eliminate the inflammation. My hands, fingers, wrists, elbows, shoulders, and feet (all areas where the RA was established in the past) are all normal and pain-free. This is even more remarkable because I workout every weekday vigorously, including weight-training. Most of what little inflammation I have comes from overdoing the exercising.

My work used to require me to eat out frequently and I was surrounded by (usually overweight) people eating the Standard American Diet. One of Dr. McDougall’s expressions that I like the most is: “the fat you eat is the fat you wear.” I have almost no fat on my body now, after losing about 10 pounds, and I feel lean and svelte. I come from a family with “genetically” high cholesterol. My own cholesterol was at the 230 mg/dl, which my doctor considered to be “on the high side of normal, but not worry about it.” After giving up all simple sugars, including fruits, it dropped to 178 in a few months.

My husband and my parents were skeptical, but they were supportive. I am also lucky to have a family doctor who understands my need to help myself first. She has never reproached me for not following the advice of the rheumatologist, who she had referred me to. And I believe she is just as amazed as I am to see the inflammation completely gone.

My family (husband and two teenage daughters) recently spent ten days in Paris. We walked everywhere, visiting as many sites and museums as we could everyday. The days were long and it was not unusual for me to be on my feet for four to five hours at a stretch. It is times like this that I realize that my life has been restored, since just four years ago I was facing the possibility of being crippled and maybe wheel-chair bound.

In Paris, we stayed in an apartment hotel, so that I could cook all my own meals. To save time, that meant I had a large bowl of oatmeal for breakfast, and rice or potatoes, along with canned beans and tomatoes for most of my other meals. I was satisfied and full of energy. Are you shocked to hear that I took a trip to the “food capital” of the world, and ate rice, beans, and tomatoes? That I could walk by the bakeries with delectable pastries and French breads, and bistros spewing irresistible aromas – and not partake? When I look at that food, I simply think, “That food represents severe pain to me. I’ll pass on it.” My arthritis is just “lurking” in my body, ready to scream at me if I go back to my old way of eating. So I must be vigilant for the rest of my life. I think that this is a small price to pay for my health.

You can cure serious arthritis for free, like Phyllis. Most (70%) patients who have inflammatory arthritis are dramatically improved within one month by following our diet. The McDougall diet – starches, vegetables, and fruits and no animal products of any kind and no added oils – must be followed strictly. Sometimes wheat and corn must be eliminated, too. The last step in searching for offending foods is the “elimination diet,” found in my December 2002 newsletter article: “Diet for the Desperate.”

You should also read “Diet: Only Hope for Arthritis” and “Star McDougallers” – Jean Brown, Vanessa, Sabrina, Mayra, and Rolling Back Dermatitis… These are found on my web site at www.drmcdougall.com. There are free recipes at the end of the newsletters.

…Or you could spend more than $15,000 a year on medications, and keep your arthritis and your doctors. You would think making the obvious choice would be easy. But many people don’t because:

1) They do not know that at least 25 studies published in the scientific literature show that rheumatoid arthritis, lupus, psoriatic, and non-specific arthritis are caused by the Western diet and in most cases can be cured or dramatically improved with a low-fat, plant-based diet.

2) They do not believe they are capable of making lifelong changes in their diet.

3) They do not appreciate the obvious fact that a starch-based diet is the tastiest diet imaginable and much more enjoyable than yellow and brown foods that taste of grease and salt (the Western diet). (Just look at the foods and you will see the obvious difference.)

4) They falsely believe the medications will cure them, or at least significantly slow their painful journey to a cane or wheelchair.

5) They cannot find a doctor to support their efforts. Yet most have not asked for such help from their doctor.

6) They incorrectly believe a healthy diet will be costly, when the truth is they could save hundreds of dollars on their food bill, thousands on relatively useless medications, and hundreds of thousands on hospitalizations and long-term nursing care.

7) They believe they will get no support from family members. However, faced with your loss from death or disability, or maybe worse yet, caring for you as an invalid; who could refuse to support your change in diet?

8) They believe they will not be able to stick with a change in diet. Not true because the pain of arthritis will keep you on track. Good health through good nutrition is a self-rewarding (and punishing) treatment.

9) They believe starches will make them fat, and carbohydrates will cause them insulin resistance and raise their triglycerides. Actually, a starch based diet will restore their trim appearance, vitality, and health.

10) They think, “If this was so easy and effective then everyone would know about this and every doctor would treat patients in this manner – not just McDougall.” This is a well kept secret only because the economics do not favor wide distribution of the knowledge.

If you know someone with arthritis, make their day by challenging them with this cost-free, self-cure. As an added incentive, tell them that soon they can be a “Star McDougaller,” and learn the true joy of helping others, just like Phyllis Heaphy.