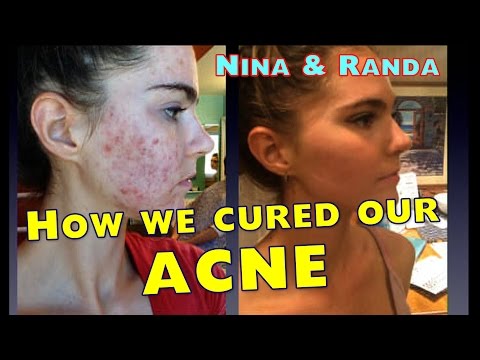 We are identical twins. By profession, we both are performers and actors, and it’s impossible for us to be hired with our faces covered with pimples. Developing severe acne in the spring of 2014, at age 20, was devastating. We didn’t want to go out of the house or see our friends. We started thinking that we would not be able to continue our dreams of being singer-songwriters and actors. Our appearance was just too awful.

Our father, Jeff Nelson, and our mother, Sabrina Nelson, founded the website, VegSource. Our Mom was one of the first Star McDougallers. Over 20 years ago she was diagnosed with a rare, painful, disabling, and sometimes fatal, autoimmune disease known as Relapsing Polychondritis.  Fortunately, she found out about Dr. McDougall’s diet, which put her disease into remission. (Dr. McDougall says she has been “cured.”) Because my family went plant-based for my mom’s health, we were all raised vegan. But we did eat peanut butter, soy foods and occasionally other higher fat foods like guacamole, hummus and seitan.

We really started breaking out about 6 months ago, when my parents were away and we were feeding ourselves and eating a lot of peanut butter on toast. Then, about 3 months ago we took a 3-week trip to England and France, where it was difficult to get healthy food. The vegan food was full of oil; they even put oil in rice. We ate a lot of Starbucks oatmeal in the UK, but Starbucks UK makes their oatmeal with milk or soymilk, not water, so we were having lots of soymilk. We were also eating Clif Bars and Starbucks bars that contain almonds or other nuts.

While in England the acne got so bad that one of our English friends told us to go to the NHS, the free British Health Service, where we got antibiotics.  The acne sores on our faces did not improve and the antibiotics gave Nina severe diarrhea during our entire stay in Paris! To try to get rid of the acne, we have seen dermatologists repeatedly, gotten facials, used a blue light therapy, applied different cleansers, and took antibiotics a number of times.  The first time they helped and the acne calmed down, but each time after that the antibiotics seemed to be useless.

We saw three different dermatologists, including one who is considered the top acne expert at UCLA.  Each of them concluded the same thing: we should take Accutane (a powerful derivative of vitamin A used to treat severe acne). We have friends who took Accutane and suffered with awful side effects, including hair loss, pain, and depression. One of our close friends developed irritable bowel syndrome, forcing him to take a leave of absence from college. Neither of us was willing to take Accutane.

The answer to our disfiguring disease came on a car ride to Northern California to visit our grandparents in late August of 2014. My dad suggested we read carefully what Dr. McDougall had to say about acne. Nina immediately, in the car, did a search on her cell phone. In an article on his website, Dr. McDougall discussed how acne is all about diet. He wrote how medical doctors commonly say “Acne has nothing to do with diet,” and how this conclusion comes from a single article published in 1969 about the effects of eating chocolate, and has nothing to do with the effects of a healthy low-fat diet on acne. Dr. McDougall also said that adopting a very low fat diet would cure acne. That meant that we had to eliminate many of the vegan foods we had been eating like soymilk, guacamole, avocados, nuts, hummus, Clif bars, olives, and peanut butter. It was important to do this 100%, he wrote, because even small amounts of excess dietary fat, including so called “health-food” vegetable oils, could trigger a breakout in teens suffering from our condition.

We decided that his medical advice was worth a try. The main thing was for us to eliminate the fats – all whole foods, but also probable triggers for acne when our hormones were also running high. The results came very fast!  Within 3 or 4 days, we both noticed that we had no new pimples!  The old acne was starting to heal and there were no new breakouts happening. It would not be an exaggeration to say this was one of the most exciting things that ever happened to us.  We were finally able to actually have control over our complexions. And the treatment cost nothing and was free of side effects. These “after” photos are from about 6 weeks after we changed our diet. Now we eat our oatmeal plain with water only. Our main meals consist of brown rice with veggies, potatoes, sweet potatoes & steamed veggies, condiments, lots of beans, applesauce, yonanas with oats, whole wheat or rice pasta with spices to jazz it up. We also eat extra fruit, dried fruit, and smoothies with oats in order to keep our weight on. (We lost 5 pounds each by stopping the fats and oils and don’t want to lose anymore).