By Miyoko Schinner
This is actually made with pearled spelt, which does not require the overnight soaking and 2 hour cooking that real farro does. It produces a result that is not as chewy as true farro, but is extremely rich and earthy in flavor and texture 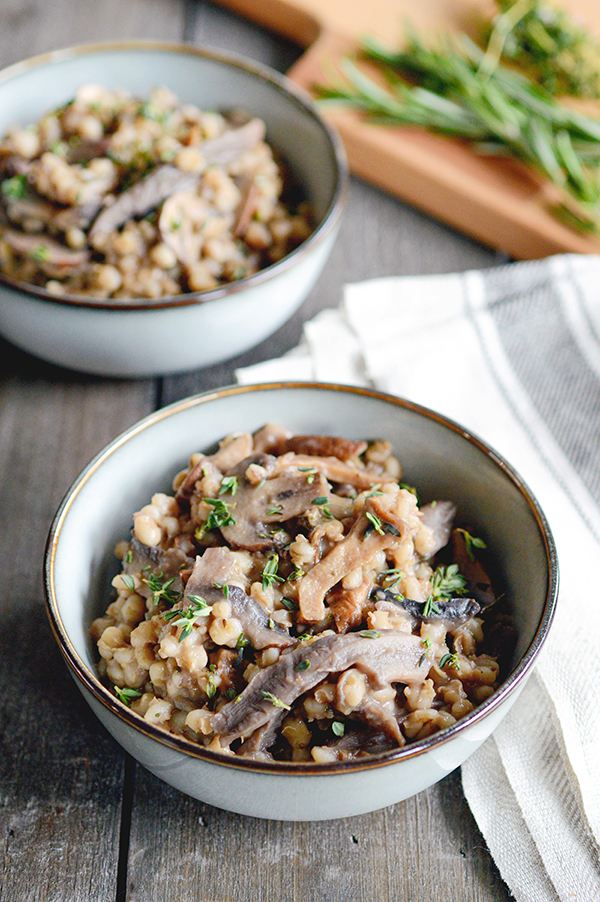 1 For the farro: Soak the porcini mushrooms in the hot water and set aside while you begin to prepare the risotto. Saute the onions and garlic in a small amount of water or stock until tender. Add the farro and cook for a few additional minutes. Add one cup of mushroom broth and stir every couple of minutes while simmering. When the liquid has mostly been absorbed, add an additional cup of stock. Keep stirring often. Meanwhile, prepare the mushrooms as instructed below (the mushrooms can be prepared simultaneously with the risotto). For the risotto, continue cooking by adding another cup of liquid, stirring and simmering. After adding your third or fourth cup of broth, add the porcini mushrooms along with their soaking liquid. Stir and simmer until absorbed. Finally add the final cup of broth, thyme, rosemary and the mushrooms below and cook until the farro is al dente but tender. Serve immediately, and if desired, sprinkle some almond parmesan on top.

2 For the mushrooms: Place all ingredients in a large saute pan with a lid. Cover and set over a medium flame. Allow to cook with the lid on for several minutes until juices have exuded and mushrooms have shrunk slightly. Then remove the lid and continue cooking, stirring occasionally, until most of the liquid has been absorbed.

Hint: Use a variety of mushrooms for flavor and contrast, such as shiitake, crimini, button, Portobello, oyster, king trumpet, etc. Entrees
See recipe
Visit Us Pin This
Visit Us Share