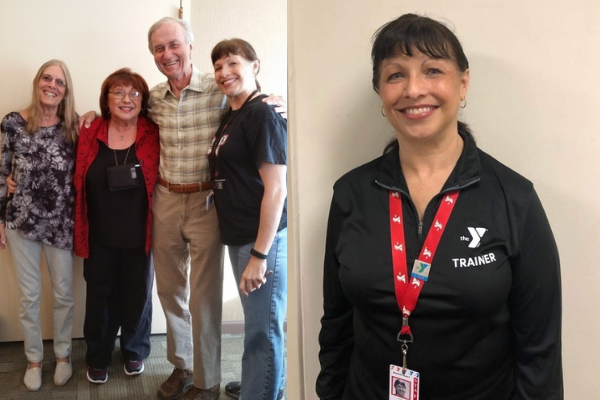 My journey began just a few months after I turned 24. I started feeling numbness in both my hands. Within a few days, I became totally numb in not just both hands, but along the side of my body. I also experienced severe levels of fatigue and “spasticity.” I went to a Neurologist who told me, after getting some tests (including an MRI), I had Multiple Sclerosis. The doctor then proceeded to tell me that I should expect I would have to use a cane in a few years. This would be followed by me eventually needing a wheelchair, which would then progress to me becoming bedridden. Ultimately, I would die in about 20 years from the disease.

Being only 24 years old, I was devastated! I tried to break up with my boyfriend because he shouldn’t have to be “saddled” with a cripple. I fell into a state of deep depression. The doctor prescribed Steroids, which they did back then, and told me it should shock my system into a temporary remission – until the next attack. The steroids gave me excruciating pain in my hands, along with other acute discomfort.

From then on, my life became a series of different types of attacks on my body. At one point, I lost the strength in one leg and had to drag my leg behind me (like Quasimoto).  I had a period where my vision became damaged, and it seemed like I was looking through a “cheesecloth” (after which, I no longer had 20/20 vision and had to wear glasses). All of this was peppered with the numbness from all the different flare-ups, balance problems, tripping due to varying muscle weakness, spasticity and the overwhelming physical exhaustion.

During all this, I had to carry on and work and live. It turned out that my boyfriend was stubborn enough to not only stay with me, he ended up marrying me! And I became stubborn enough to start trying to exercise to the point that my body might just stay healthy in spite of my Multiple Sclerosis. This was actually pretty effective for lessening my flare-ups and strengthening my muscles, but the disease was still there. It became prominent again when I got pregnant and had my two boys. The doctors cautioned me about pregnancy not being good for my Multiple Sclerosis, but I desperately wanted children. When a woman is pregnant, her body protects itself and the Multiple Sclerosis went into remission. After the pregnancy, it came back with a vengeance! Once again, I went back to exercising to strengthen my muscles and heart. It worked adequately for a number of years, but age also delivers its own form of damage.

Finally, at the urging of my neurologists, I succumbed to their pressure and started giving myself Multiple Sclerosis medication with intramuscular shots (and I HATE needles, but I was THAT desperate!). I did this for a while, but I would be sick the day after the shots with flu-like symptoms. This did not heal me, it just “protected” me.  After I got tired of feeling sick once a week, I was encouraged to take daily shots of a different Multiple Sclerosis medication because it had no bad side effects (except for the fact that I was giving myself a needle every day!).

All the negative aspects of the daily shots were not making me very happy, not to mention I was still having some of the other effects like balance problems, tripping due to muscle weakness, etc. When oral Multiple Sclerosis medication became available, my neurologist eventually allowed me to start taking it. That, however, came with its own problems. The oral medications lowered my resistance so severely that, within the next year or so, I contracted Shingles. Then I got a viral infection so bad that I was extremely weak and couldn’t walk without holding onto a wall.

At this point, my mother (God bless her!) got upset enough that she started looking into other ways of helping me manage my disease. She turned to Dr. John McDougall to have him help me regain my health through food. Dr. McDougall is an expert on Multiple Sclerosis and published a study on the effects of a whole-food plant-based diet with no added oils on the disease.

I originally met Dr. McDougall in 2015, when my mom, my niece and I visited Dr. McDougall’s headquarters in Santa Rosa, California, for a weekend retreat. I, initially, discovered how and why different kinds of foods have such a powerful effect on your body and that certain foods are virtually poisons. So, after this extremely informative weekend, I began to embrace his Starch Solution program and tried to eat almost 90% compliant with no animal proteins, no oils, and limited dairy. Now, because of the oral medications I was taking, my Multiple Sclerosis condition had deteriorated me so severely that I needed Dr. McDougall’s medical help and advice, again.

In June of 2016, my mom and I  went back to Santa Rosa for Dr. McDougall’s 10-day Live-in program, where I received complete medical testing and examinations. After the medical tests and examinations were done, I met with Dr. McDougall. He said that he felt I could be totally free of my Multiple Sclerosis medication if I went 100% compliant with his program. I was scared, so he offered me a deal. He asked me to try and live completely Starch Solution compliant for six months, from June 2016 to January 2017 when I would see my neurologist for my annual examination. This meant no Pizza on Fridays and no ice cream that had dairy in it (and I LOVE ice cream!!). Well, I made the promise to try, and that’s when some amazing things started happening for me!

After several months of completely eating the Starchivore way, I went to visit my sister-in-law. She said, “Hey Jean, I just noticed that your hands aren’t shaking anymore when you talk.”  I thought that was really cool, but I also realized that I was not experiencing any more nightly leg tremors. Then, the most remarkable thing happened to me. I was getting out of my car to go to work, and it started pouring rain. I noticed, without even thinking of how I might trip or fall, I RAN out of the parking lot, across the street, and up two flights of stairs to the entrance to the Y, without even ONE trip or stumble! When I told my mother about this amazing accomplishment, I wanted to do something to show her my new found sense of balance. I tried to hold a yoga-type position of balancing on one foot, (which I could never do because of my balance problems) and I found that I could do it! My mom cried when she saw me! And I said, “I am NEVER going back to my old way of eating again!”

Needless to say, I finished up my six months of the McDougall-way of eating, but I was so amazed at what my body was doing (or NOT doing) now, that I completely pledged myself to a “whole food, plant-based” Starch Solution way of living! In January of 2017, I saw my neurologist for my annual visit. When she examined me and saw my MRI, the results were nothing short of amazing. The foot-flex test that Multiple Sclerosis victims are given yielded a TOTALLY NORMAL RESPONSE. My Multiple Sclerosis had gone into complete remission! In January 2017, I was able to stop the oral Multiple Sclerosis medications completely, and eliminated my need for any Multiple Sclerosis medication and statins for cholesterol. I can say, absolutely, that I am living proof that food CAN heal, as well as hurt! I became so passionate about Dr. McDougall’s Starch Solution that I enrolled in his Starch Solution Certification Course.  I studied, passed the exam and now I am a knowledgeable and Certified Starch Solution Graduate. I am looking forward to teaching others about The Starch Solution and the difference it can make in a person’s life!