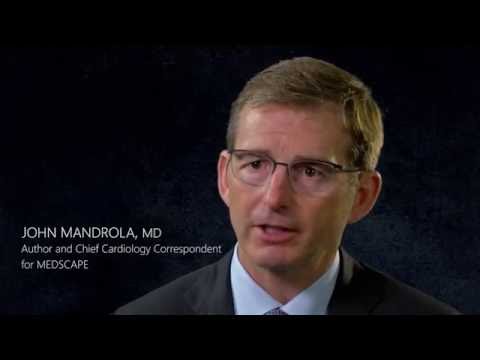 A Closed Caption version of this video is available on YouTube.

Dr. Mandrola practices cardiac electrophysiology at Baptist Health in Louisville Kentucky. This is his twentieth year of medical practice. Dr. Mandrola is also a writer. He is the chief cardiology correspondent for Medscape—a web resource for health professionals. In addition, he maintains a general health and fitness blog, Dr John M, and is active on social media, especially Twitter, where he can be found @DrJohnM.

His work has appeared in the Journal of the American Medical Association-Internal Medicine, Atlantic.com and the Louisville Courier-Journal. Dr. Mandrola has been a lifelong endurance athlete. He has competed as a triathlete, marathoner, masters swimmer, and cyclist. He lives in Louisville Kentucky with his wife, son, daughter, granddaughter. He is currently writing a book on exercise and heart disease. The Haywire Heart is due out in 2017.

Dr. Mandrola is a graduate of Hobart and William Smith College and the University of Connecticut Medical School. He received his Internal Medicine, Cardiology and Electrophysiology training at Indiana University. He was awarded the outstanding fellow award in his final year of training. He is a fellow in the American College of Cardiology.

Although he is a practicing doctor, Mandrola has presented original research and been an invited speaker at major medical meetings and academic institutions. In 2015, he presented medical rounds at Yale University. His topics include atrial fibrillation, sports cardiology, end-of-life care, social media for physicians, and medical decision-making.